Reaction of Jemima Khan on Imran Khan Second Marriage Wish is come in which she clearly announce that in future she aim to cut the name of Khan and goes back to gold smith. Further she said that this name is emotionally attached with their children’s and now they grow elder and this will never effect on them. Jemima Khan is ex-wife if Imran Khan and too much popular in the work because she is not only ex-wife of Imran Khan but also she is a Journalist, heiress and campaigner of England. She is also associate editor of New Statesman and European editor at large for Vanity Fair. She does too much loves with Imran Khan and she having very strong mind and reaction with respect to Imran khan second marriage. Khan announced during their speech on Islamabad Azadi square protest and said he want to married in new Pakistan and a lot of other thing but after few days later said he think about the marriage when he become new Pakistan and also said don’t decide to time for marriage. Jemima Khan provide the strong reaction on this speech in front of media and she said if Khan will be going to be marry than she will remove “Khan” name with their name and will be known in the world with their old family name Goldsmith. She having strong mind about the vision of Khan and if Imran will be do anything related to their marriage she finish all things with Khan. 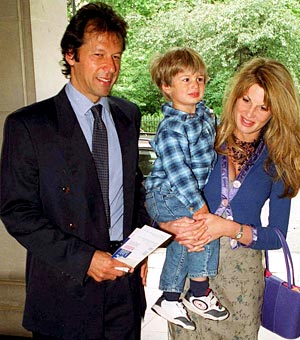 Khan was married with Jemima in May, 1995 and this relation will be not becomes long time relation this relation will be ended in 2004 but loves never die and now Jemima known in the name of Khan. Khan has two children from this marriage one is known is Sulaiman Khan and second is Qasim Khan. She completed their MA study in Middle Eastern Studies from University of London and focusing on modern trend in Islam. Jemima and Imran are having very good term even after the divorce.