Now before day Fake news connect to WikiPedia that Hamid Mir is An Indian Agent. Hamid Mir is an top anchor person of Pakistan, from a period of time he will connect with top Pakistan news channel geo tv. He is a well-recognized personality according to his connections with the leaders of top terrorisms groups. But these all things are related to his occupation, majority of his program are related to defense and terrorisms issues. So it’s necessary that to make contact with them to know about originality and facts that are hidden from ordinary persons. But now many fake news are connected with Hamid Mir to called him an supporters of terrorists and even now this news is also spread that he is an Indian agent. These all things had arisen from his opposition persons even they modify the main page of WikiPedia just to prove that Hamid Mir is an Indian Agent. According to unofficial source these all things are just fake; his competitors just want to lead down his name. Further detail shows the originality of this news so keep in touch with thus page. 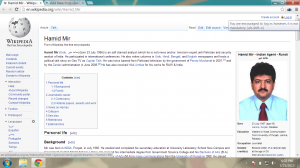 Above is fake and edited WikiPedia pic that shows that Hamid Mir is An Indian Agent..

If one sees the introduction of Hamid Mir then behind the whole things he had strong grip on Pakistan politics as well as on Current Affairs. He completes his master in mass communication from Punjab University Lahore. It will not quite exact that he is a true person but he always talk depending on fact and figures. He break few wrong news before a period of time although he try to give prove of this thing but then this news is prove to be wrong that cause main reason of falling down his personality. Overall one can forgot his positive work that he had done for Pakistan. Moving towards that point that Wikipedia called that he is an Indian agent is totally fake. There is nothing available on Wikipedia related to this news so further confirmation its necessary that one must visit their page.