T20 World Cup 2012 having Pakistan Vs Australia Match on Tuesday and Pak Vs Aus T20 Highlights Will be available here after Match Timings here at this Page. Tuesday (Today) is very much important day for Group 2 Decider specially for Pakistan. On 2nd October there will be two matches played here in Srilanka Grounds and these two are last Matches for this Group. This Super 8 Round is becoming more Sensational for those who wants that this Match is must win for Pakistan Cricket Team so far. Actually Pakistan Cricket Team is now just looking for a heavy margin win against Australia. Today’s first Match will be between Pakistan and Australia and 2nd Match will be between India and South Africa.

Pak Vs Aus T20 Match Highlights Video will be updated here at this Page..Stay Connected

But all eyes are just focusing upon the first Match. As we all know that Pakistan knock down South Africa in same Super 8 Round. This 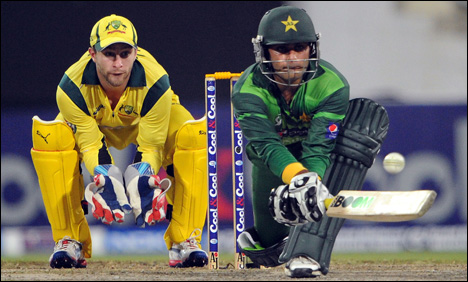 Time Pakistan is lying under very competitive situation and all Pakistan Nation is still thinking about that either Pakistan will be play in Semi Final or not but this Time the more focused thing is that either Pakistan won from Australia or not. The Recent Records of Pakistan and Australia head to head said that Pakistan is favorite in this Pakistan Vs Australia T20 Match against Australia. If Pakistan Beat Australia in today’s Match and on the other hand South Africa beat India in second Match than there are more chances Pakistan will play in Semi Final of T20 World Cup 2012.

So as we said earlier in this Writing that this Pak Vs Aus Match is so much appealing for Pakistan’s nation as well as Pakistan Cricket Team as this Match is must win for them.

Pakistani Coach said that those things should be keep in consideration in previous loss against India. He also said that Pakistan Cricket Team having so many flaws against India and we try to minimize those factors in this Must win against Australia.Comment Section is there for you so that you can Talk with us about Pakistan Vs Australia T20 Match.