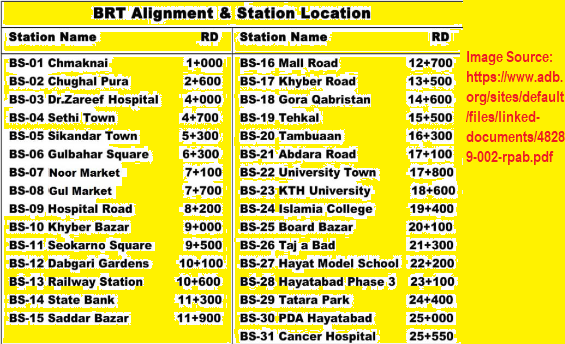 A project that is supposed to be a game-changer and yes it is; is finally opened up for the public. After inauguration, the timings and BRT Peshawar Route Map also with the ticket price and stations spot are also let out. Although it’s not completely functioning as it’s planned but still, thousands of local travelers are starting benefit from it. Yes, it’s also hoped that govt will complete its remaining part too. Despite taking much time in the completion, citizens of Peshawar are happy and have this opinion that now they hope to reach the destinations on time. They are absolutely right because the previous traveling structure of this city is now very old and it’s not easy all to travel now especially for those who use local options.

There are a total of 31 stations on this main route map that is tabled below. While with the attached local route the numbers of stations are 146 that are really good in numbers.

As per the BRT Peshawar Timings schedule, this service has started at sharp 6 in the morning time and continues till 10 at night. So, overall this is a good time cycle in which the local person wants to travel.

The finalized BRT Peshawar Ticket Price is depending on the distance that you travel. On the first traveling slot of 0.1 to 5 Kilometer, only 10 rupees have charges.

And same 5 rupees will add on the next 5 KM. So, overall this is not a small favor that govt is giving to all those who travel

If you have any issues regarding this service, this 091 111-477-477 is also there for you. Now, we conclude the allocated satiations on BRT Peshawar Route Map and Timings Ticket Price then everything is trying to cover in it. Furthermore now, officially will maybe face some issues. But at the end of the story, this is the good and needs of this area.