It will accept that within couple of months CSS exams written result 2013 had announced. As officials announced CSS written result 2013 then here we upload it as soon as possible. Officially Federal Public Service Commission is responsible to take these exams so they are also responsible for announcement of its result. These exams are held for the recruitment to posts in BS -17. Every year thousands of students appear in this exam they all struggle hard in order to get succeed in this exam. A big dream of every student is to pass CSS exam but a hard work with proper plan plus luck is require to fulfill this dream. After score passing marks an interview will held for short listed students and during this interview then final candidates are selected. So passing of written exam is one major and important task for every candidate. Hopefully in month of August of September this result will announce. We are complete in touch with officials so keep in touch with this page for final announcement. 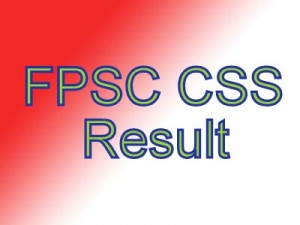 As CSS exams written result 2013 announced it will given there…

If one sees the procedure about marks of CSS written result 2013 then the commission with prior approval of the government may fix qualifying marks in any or all of the subjects of the examination but a candidate who fail to secure at least forty perc marks in any compulsory subject, 33 perc marks in any of the optional subject, or 50 perc marks in the aggregate and 100 marks at the viva voice, will be considered to have failed and will not be eligible for appointment. Another important thing is that the candidates qualifying the written examination and found eligible will be called for medical examination and psychological assessment.  Now every candidate who gives this exam is just waiting for announcement of CSS exams written result 2013. Our best wishes are for all candidates that they doing good in these exams.