Certainly, corruption is the biggest one problem which Pakistan is facing these days. Basically, the word corruption means obtaining personal gains, power or influence through illegitimate ways, often by using expenses. Pakistan is an Islamic state, but unfortunately, the Islamic democratic system is not established in this state which gradually becomes a curse on the people. Due to this problem, Pakistan is moving back from other developed countries of the world. From the International Transparency, according to a survey that Pakistan is at 134th position in the list of least corruption state. The fact is that the society of Pakistan has highly emerged into this disease.

Not only the elite common but the elite messes are suffering from the corruption wave. In any institution, corruption may exist where one can use the legitimate ways of getting ahead or deceived by allowing the group of people or individuals to use their power with favors or money.

Furthermore, everyone wishes to get success or fulfill their desires for this most corrupt means are used on multiple levels that’s why corruption is caused due to a number of reasons. Poverty is a major cause of corruption. So, people having low salaries use illegal ways to achieve their goal than corruption is seen there.

There are many institutes in Pakistan that are prone to corruption such as in the police sector and in the law enforcement sector, in legal profession and judiciary, power sector, in customs and tax, land administration, education, and health. 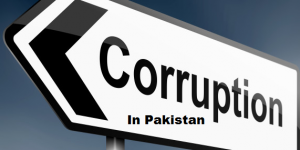 If we can remove the corruption from its roots, then it is necessary to cut down its causes first. There is a need to stop the ritualistic culture. Present leaders of Pakistan should take strict measures and take strict actions against the corrupt system. The true Islamic system should be implemented that must be based on democracy. Intercountry there must be political stability and power politics should be removed.

Leaders must be sincere with their people. Everyone should be accountable and some radical steps should be taken by the government to lessen poverty. Both elite class and poor people must be treated with the same law there should be discrimination. Respective jobs should be given to everyone. In the end, it is found that the leaders of Pakistan are responsible for this, so its responsibility of Government that they should take radical steps to eliminate this disease from our beloved country.