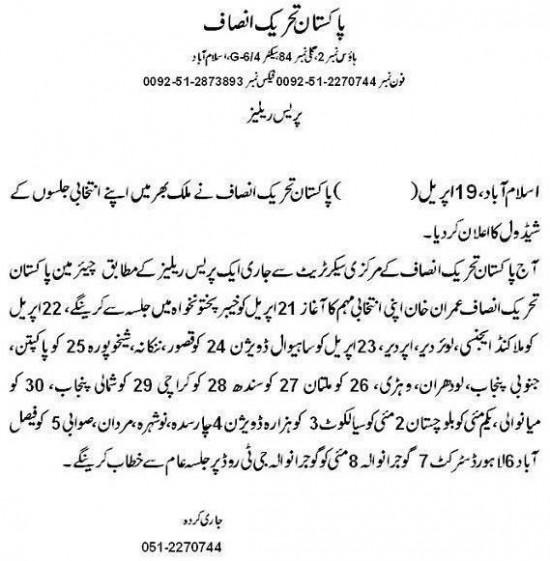 Election 2013 goes to its peak so now PTI Campaign Schedule had announced. This PTI Election Campaign Schedule 2013 covers whole daily activities. According to this schedule they start their campaign with a rally in Lahore then a session of jalsa start. These were held from April 21, 2013 to May 9, 2013. First jalsa will held in Karak, Dera Ismail Khan and final will take place in Rawalpindi. This time party management focused on jalsa on daily bases in different main cities of Pakistan. These jalsas were held in every province of Pakistan and their leaders make sure to participate in every gathering. Because it will hope that these types of activities play an important role during this election. A lot of awareness will build in people according to cost of their votes. This election is depending on the motivational strategy, the parties who work on this point have greater chance to get maximum seats in different cities. Another important thing is that this year PTI show a great discipline in their activities. They believe on team work and show that their every decision will finalize by committee. They get rid from one person decision and believe that original democracy found in this party. Hopefully these final days of PTI Campaign effect of final results. 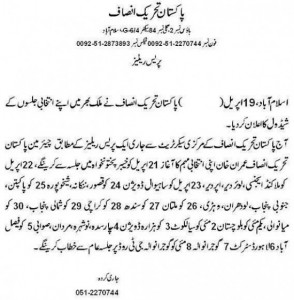 PTI Campaign Schedule Election 2013 is given there…

During this election it will accept that PTI prove their strength and get majority seats especially constitutes who cover maximum city areas. They called youth as their major strength and this year a huge number of youth registered their votes. If they go to polling station on that day then it will become beneficial for PTI. During this PTI Campaign they try to motivate the youngster to vote for their party. Finally election day decide the final results so keep in touch with this page to get these results.