Here one discuss about BOL TV channel is controversial is past and everyone criticize on it because BOL TV channel is owned by Malik Riaz and Dawood Ibrahim but Axact is totally denied this controversial talk. BOL network basically Pakistani, Karachi based incoming media channel and that’s watched upcoming 24-hours Urdu news in all over the world. Its editor chief is Kamran Khan and other most popular media personalities like Waseem Badami and Iftikhar Ahmed. BOL TV channel has been started the new project and coming soon among the people of Pakistan like other electronic media because this advance age fill with advanced technology and electronic media is also become advance but if we talk about BOL television channel it’s started by the Axact media group that’s having great importance in the world of IT and play important role to play entertainment, sports and other social media appearance. Basically BOL TV project started to bring positive change and also bring revolution in media industry of Pakistan.  There are so many sources said BOL playing different kind of role in electronic media and most popular anchors from different media channel will started switched to BOL network because it’s only channel that’s becomes increased their salaries initially. 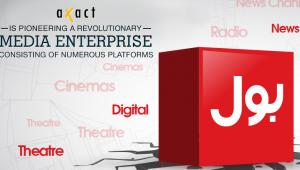 BOL TV channel becomes controversial last year when one media channel of India Hindustan time reported that behind the scene play back of BOL TV by Dawood Ibrahim and Malik Riaz. Dawood Ibrahin is a leader of Indian organization crime in Mumbai and this time he is wanted list of Interpol for cheating and some sources said he has close link with Al-qaeda and intelligence services of Pakistan. But on the other hands Malik Riaz is a businessman and real estate investor and owner of Bahria town Pakistan. He is contributed in help of human being in difficult situation in all over Pakistan. Axact is strongly denied related to BOL TV is not affiliated with Dawood Ibrahim and Malik Riaz. There are so many other companies are jealous to stared and earning this mega project so due to these reason they claimed such kinds of controversial things that’s not in favor of electronic media and as well as for Pakistan.

If one sees the final result of  this talk then in owner name BOL TV Channel Axact and Malik Riaz are sees to collaborate with each other and they has shares in this channel. While involvement of Dawood Ibrahim as owner or partner is seeing false because no one afford that in upcoming days such type of controversy come when this channel is going to its peak. So if any kind if partnership will involve BOL TV Channel then it will must highlighted before its launching.