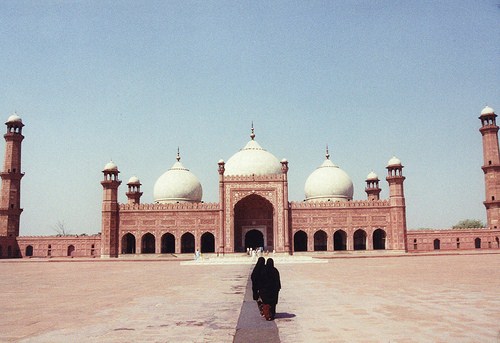 Islam was bought to the South Asian subcontinent in the eighth century by wandering Sufi mystics known as Pir. As in other areas where it was introduced by Sufis, Islam to some extent syncretized with pre Islamic influenes, resulting in the religion traditionally more flexible than in the Arab world. Two Sufis whose shrines receive much national attention are Datah Ganj Baksh in Lahore and Shahbaz Qalendar in Sehwan Sindh. The Muslim poet and philosopher Sir Muhammad Iqbal first proposed the idea of a Muslim idea in the subcontinent in his address to the Muslim League at Allahabad in 1930. His proposal referred to the four provinces of Punjab, Sindh, Balochistan and NWFP. Iqbal idea gave concrete form to the Two Nation Theory of two distinct nations in the subcontinent based on religion and with different historical backgrounds, social customs, cultures and social mores.

Islam was thus the basis for the creation and the unification of a separate state but it was not expected to serve as the model of government. Muhammad Ali Jinnah made his commitment to secularism in Pakistan clear in his inaugural address when he said:

“You will find that in the course of time Hindus would cease to be Hindus and Muslims would cease to be Muslims, not in the religious sense, because that is the personal faith of each individual but in the political sense as citizens of the State.”

This vision of a Muslim majority state in which religious minorities would share equally in its development was questioned shortly after independence. The debate continued into the 1990s amid questions of the rights of Ahmadiyyas, issuance of identity cards denoting the religious affiliation and government intervention in the personal practice of Islam. Islam as a code of life can guide the Muslims in private as well as public matters. The Holy Quran and Sunnah can guide us in faming our private and public laws in all important matters. The laws of the country should be based on the Holy Quran and the Sunnah. Finally, we can say that all the people whether they are Muslims or not should have freedom to progress in all fields of national life. The law should guarantee should rights of every religious community. In short, we can say that Islam in Pakistani society holds great importance and significance. Without the existence of Islamic principles, it won’t possible for Muslim to live life according to Islam.