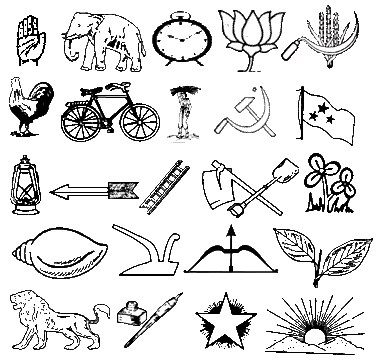 In this post, we will discuss different election symbols of Pakistani political parties which are mentioned below:

On the whole these are considered to be major and important election symbols of political parties in Pakistan. We would like to mention that arrow symbol is still not decided and Election Commission of Pakistan will solve this issue on 25th March 2013. Moreover, we would like to mention that chairperson of PPP Shaheed Zulfikar Ali Bhutto Ghinwa Bhutto has declared that her party is the original Pakistan Peoples Party and she claim that her party is the real and original heir of Bhutto party and philosophy. On the other hand, a special group of PPP headed by Naheed Khan also announced that the election symbol of PPP will be arrow. On Tuesday, Naheed Khan sought that the election symbol of PPP will be arrow. Moreover, general secretary of PPPP i-e Jahangir Badar and Samsan Bukhari said that PPPP contested the elections of 2002 and 2008 with the symbol of arrow. So it’s the right of PPPP that arrow symbol should be allotted for the upcoming elections 2013.