Expected price of Prices of 3G and 4G Packages and services in Pakistan are now come for Zong Ufone Mobilink Jazz and Telenor rates. Till these rates are not confirm and estimate according to rates of different countries. 3G is also called third generation and 4G is also called fourth Generation of cell phone technologies. 3G and 4G is the latest technology in the world. With this new technology people can use high speed of internet on their cell phones in Pakistan. The customers can use these technologies with different price as compare with 2G. All the operators are agreed the bills of 3G and 4Gwill be go up. While the cost for downloading the same amount of data on 3G network will be two or three times greater as compare with 2G technology. It is expecting that 3G and 4G technologies will be expensive in Pakistan. Although with the passage of time and with an expanding the customers base, it is expected that 3G and 4G will be available in cheapest rate and packages in Pakistan.

3G and 4G rates in Dubai that expected to come in Pakistan:

While in another neighborhood country these rates are given as below. 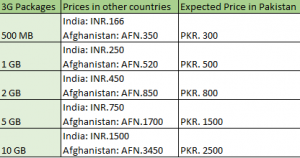