A worst news before a mega event is that Bangladeshi cricketer Mohammad rubel hossain ex girlfriend actress Naznin Akter happy Report Rape Case. This case is registered by his former past relationship girl that claim that she love her and this is reason that she meet him multiple type in a month. During these meeting one day she attacks her and attempt rape with her. According to actress she ignores it and ask him to marry but then Rubel change his attitude. After this he start a session of black mailing and now she decides that it’s time to take a legal action against him. She sees look confident for his arguments and look for justice. This is one side story and after this police takes action again this young cricketer and put him beside the bars of jail. This is one big lost of cricket team and if this case is proven right then they lost one fast bowler. This type of fast bowlers is too much important in Australian condition. But its nit easy to say that this actress says all thing right, so it’s necessary to wait for upcoming hours in which right things come more clear. 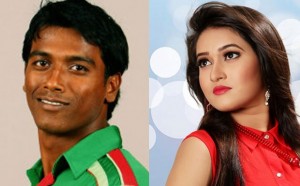 According to Rubel Hossain point of view this is totally false story and at this critical time he tries to wrap in these types of critical things. This is turning point of his career and it’s too much important for him as well as for country that he must be a part of team. According to Rubel point of view he is surely in relationship with actress Naznin Akhter. Both are attached from a long period of time, and in this period of time when he think that this is not right choice for him. He decides to leave her and asks him to keep away from him, after this she always blackmail him. This is some realty behind Bangladeshi Cricketer Rubel Hossain Arrested EX Girlfriend Actress Naznin Akhter Rape Case whose more stories are also come in upcoming days.