From here you can find Imran khan Lahore Injured video when he  fall down form stage. PTI chairman Imran khan fall down from stage in Lahore. During these days he was running his campaign with a lot of energy. On daily bases he address in multiple jalsa according to proper schedule. Due to this in couple of jalsa few bad incident take place. Today he was going to stage through lift. When he stands on lift then his couples of supporters are also with him. But due to an extra person on lift Imran khan got in balance and fall from 10 feet height. After incident he will shift in hospital as soon as possible. The most important thing is that his injury was on his head which cause seious damage. But according to hospital source now he will completely out of danger. Here we upload this Imran khan Lahore Injured video when he fall down form stage. 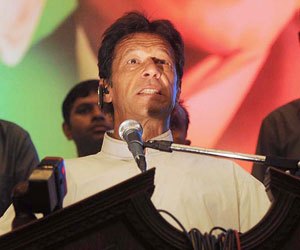 This is one worst news for PTI supporters of falling down of Imran  Khan from stage  because they all love him. He is one important person in Pakistani politics. During this election he will also ready to done serious damage. He fulfill his promise that during last days of elections he will become more energetic. He was too much busy from last month, he addresses in more than six jlasa per day. The most important thing is that from a period of time his popularity also increased.

Important news is that after falling down of Iran Khan now officials of PTI also announce that it was an incident. Because after this a lot of question arise in mind that may be it will do with proper plan. Still now he will in hospital and doctors give him treatment. We also try to find out video of Imran khan when he injured due to fall down form stage in Lahore.  According to source it wills also accept that he addresses from this jalsa.