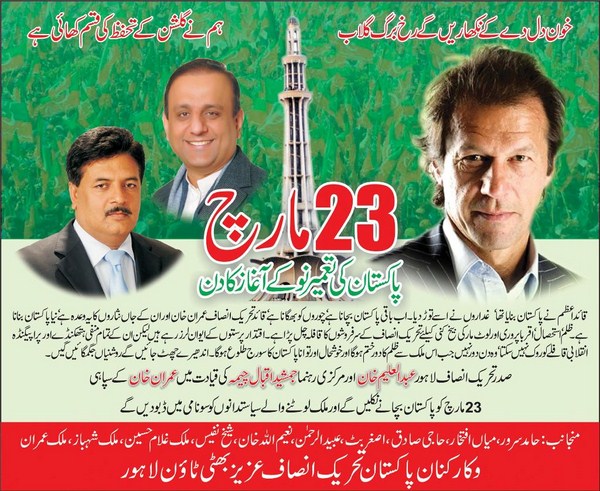 Here we will discuss PTI Imran Khan jalsa 23 March 2013 at Lahore Minar-e-Pakistan. If we talk about most popular and well known Pakistani politicians then we should mention the name of Imran Khan. As we know that few years back Imran Khan entered into the Pakistani politics and he announced his political parry named as Pakistan Tehreek Insaf. He always calls his political party as the best political party for young generation. On 19th March 2013, members of Lahore editors club called the chairman Pakistan Tehreek-e-Insaf Imran Khan in Lahore at Central Medial Cell. In this particular meeting, Imran Khan shared his views and thoughts regarding the current political situation of Pakistan. The main discussion completely focused on the policies and manifesto of Pakistan Tehreek-e-Insaf. In this meeting, Imran Khan announced that he will conduct a major jalsa on 23rd March 2013 at Lahore, Minar-e-Pakistan. In this meeting, Imran Khan focused on the depressing economic condition of Pakistan. He also said that the best way to get rid from these problems is that free and fair election should be conduct.

Moreover, Imran Khan strongly condemned the main tactics that are used by PML-N. Imran Khan also said that “This self serving behavior is against the spirit of the constitution because it envisages a neutral set during elections”. While giving answers to the questions regarding the upcoming Jalsa, Imran Khan said that onto power is being used in order to sabotage the complete gathering or crowd. He also said that without any doubt PML-N will definitely disrupt this major event because that political party wants to maintain their hold and power in Punjab Province. Moreover, he also said that opposition parties are removing their posters and hoardings in Lahore city. He also said that Punjab government was feeling threatened by this Jalsa that is supposed to be conduct on 23rd March 2013. In additionally, he also said that non-cooperative attitude and behavior will not deter people and young generation from supporting our party. In the end, he said that our party is not afraid because now people of Pakistan will be the deciding major factor.

On the whole after discussing the above mentioned PTI Imran Khan Jalsa 23rd March 2013 it is easy to conclude that this Jalsa is considered to be very important for the future of Pakistan Tahreek-e-Pakistan. Because of its importance and significance, this party makes special arrangement for making it successful. As we know that only few hours will be left for the arrival of 23rd March 2013. Let’s see whether the Jalsa of Pakistan Tehreek-e-Pakistan will be successful or not? We would like to mention that if this Jalsa will be successful then it will be alarming situation for PML-N. In the final conclusion, we should say best to luck to Imran Khan because as a Pakistani we want the future of Pakistan successful and bright. In other words, we can say that Imran Khan will be last hope of this depression and deteriorating condition of Pakistan.