Terrorism has various faces, forms and dimensions. It may be regional, national or global and international in scale. Then it may be regional, communal, political or foreign in origin. It is found worldwide in one form or the other. With the globalization, economic integration and cooperation of the nations the terrorism too has become unlimited and can be transported and transplanted to any part of the world easily. It is the cult of violence, killings, murders, arson and destruction to perpetrate terror, fear and demoralization among the masses. Terrorism in Pakistan is widespread and there seems no end to it, at least for the present. The trigger-happy terrorists and extremists have been using all kinds of violence and automatic weapons and bombs to terrorise people and the administration. Their strategies include killings, murders, bomb-explosions, looting of banks, destruction of houses, looting, arson and kidnapping. In retaliation, sometimes there is more terrorism, blood-shed, violence and destruction. In the cross-fire between terrorists and the government, the innocent citizens suffer the most because then the opponent forces become totally blind and lose discrimination. 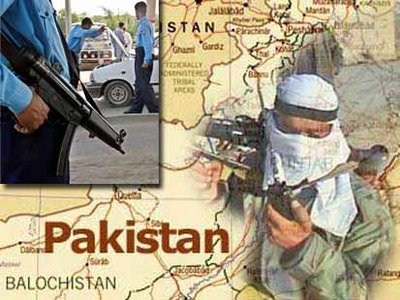 The seeds of communal violence and extremism were really sown during the partition of the sub-continent into Pakistan and India. The terrorists group in Karachi mainly consists of some politically frustrated groups and misleads youth of the society. Poverty, unemployment, deprivation and illiteracy have made the region dangerous and good breeding ground for militancy. The terrorists indulge in all sorts of anti-social and anti-government activities to achieve their narrow, sectarian and unholy aims but they are unlikely to succeed in spite of massive financial and other support from India.

The menace of terrorism needs to be tackled on many fronts. The cause of militancy and terrorism should be clearly and precisely identified and remedial steps taken. There should be clear understanding and cooperation between neighboring countries on the matter to check terrorism. Moreover, national security and intelligence need to be kept quite fit and updated. In the ultimate analysis, terrorism achieves nothing and solves nothing. Moreover, terrorism drains a country of its valuable resources and enormous funds are spent in facing and checking in it. Without any doubt, we can say that our political leaders are mainly responsible for the origin and growth of terrorism in Pakistan in most of the cases. There is still time that they realize the national interest is above everything else and that unity and integrity of the nation is the hallmark of patriotism. Only patriotic feelings coupled with efforts in reduction of poverty, illiteracy, regional imbalances and inequality among people can successfully face and fight the menace of terrorism.