Samsung announced that the Galaxy S III will be released and available in the Pakistan market on 31st May 2012. Samsung S III is the latest and big mobile phone from the Samsung and it is also said that this mobile has broken all the previous records for pre-orders.

Samsung Galaxy S III comes to the Pakistani Market with awesome and marvelous features. Its extraordinary feature is that it can see you, can easily listen to you and then also can understand your needs and is developed keeping in mind all the human abilities. It is very easy to operate this mobile phone. It is the representative phone for the Olympic 2012 which are going to be take place in London only due to his wonderful and excellent features.

Samsung Galaxy S III Available In Pakistan On 31st May 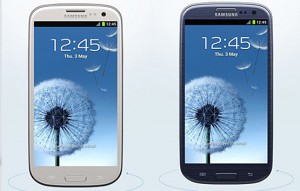 Samsung Galaxy S III will be available in Pakistan On 31st May in Price of PKR. 62,000. This Set has Android Operating System version 4 which is known as Ice Cream Sandwich. This cell phone has 4.8 inches HD screen and the interface is of Touch Wiz Nature having 1.4 GHZ Quad Core Cortex-A9 processor inside. One another marvelous thing is its 8 Megapixel Camera is auto focus with LED flash.

Have a look on the features of the Samsung Galaxy S III:

So People do not worry Samsung Galaxy S III To Be Released In Pakistan on 31st May and then you can enjoy this marvelous technology by Samsung.