In the memory of 23 March Pakistan Day Parade 2015 will start at morning of this memorable day. 23 March day is very important in the history of Pakistan. On 23 March 1940 all the Muslim of the sub-continent gathered at the Minto Park Lahore which is now called Iqbal Park and passed a resolution named as Lahore resolution. The basic aim of this gathering was to tell the Hindus and British Government that Muslims now come at a single plate form and they want a separate home land. It was a big achievement of the Muslims. Lahore resolution was put on the meeting on 23 March and it was passed on 24 March 1940. There is another importance of the 23 March because on 23 March 1956 first constitution of the Islamic republic of Pakistan was given. Every year in Pakistan a parade is arrange in remember of this day. This time parade is also updated here on this page so must visit this page. 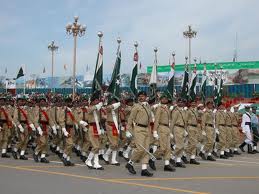 Now all the Pakistani celebrates this day every year. Government announces every year public holiday and celebrates some national function on government level. The main function on this day is the military parade at quaids Mizar and iqbal Mizar. President of the Islamic republic of Pakistan give some medal and awards to the favorite personalities of the country. President of the Islamic republic of Pakistan also give some relaxation to the prisoners. So it is a busy and historical day in the history of Pakistan.