An important constituency of Karachi is Na 248. So result of Na 248 Karachi is too much important during election 2013. From here you can also find winners list of candidates from this Karachi. In this election it will accept that a tough competition will take from this constituency. This is only constituency from where MQM is quite weak. But during this election MQM give ticket to Nabeel Gabool. He is a well-known personality of this area. From a long period of he is part of PPPP. But during this year he decides to change his party due to internal conflicts and enter in MQM. After his participation MQM sees strong from this constituency. On other side from Na 248 Karachi PPPP is too strong they have bank vote in this area. In previous couple of elections they win this seat. But this year their old party leader of this area enters in other party and he also contest in election.  So during this election they seem to quite struggle from this area. During this election they give ticket to Shah Jahan Baloch who is also an active party worker. During this election another strong candidate also contest in form of Ghanva Bhutto from his own party PPP-SB. He has also influence in this area due to her husband. So it will accept that a close result will announce from Na 248 Karachi. 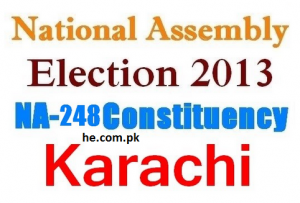 If one sees results of previous elections then in previous two elections PPPP win this seat. During 2008 election PPPP candidate Nabeel Gabool win this seat with a huge margin. While in 2002 he also win this seat with a reasonable margin. But during this election he is part of MQM. But still now PPPP is favorite in this area because their vote bank in this area is quite strong. Another important thing is that few short groups also have influence in its different area and they are effective on its result. And their majority is support to PPPP so this advantage goes to PPPP. Couple of other parties also announces their candidates but original competition will hold between PPPP and MQM. Both parties try to get the result of NA 248 in their favor. But overall your vote chose the right person so must cast it.