As we know that now a days, election debates & political suggestions are on present in every person of Pakistan. Every person has their own ideas about Punjab assembly PP elections 2013 results. Some says, PML-N will win, some says, PTI will win but the Final decision will be on 11th of May 2013. Today, every party is struggling, some parties asking for votes after showing their previous good work; some criticizes to other for taking vote. Some gathering the youth and hoping them for Naya Pakistan. PML-Q is also struggling and saving their voters with the motive of “Parha Likha Punjab”. PPPP is not a competitive or winning party in the Punjab but the fight between the PTI & PML-N  & the contribution with PML-Q seat adjustment, this may be take a reasonable seats i.e 50. Now a days, two main party are doing their election campaign well according to other in Punjab province, that are PMLN and PTI. And this year these both parties are most awaiting for Punjab assembly PP results during election 2013. 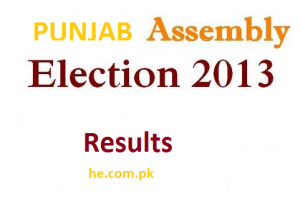 Punjab assembly PP elections 2013 results are given there on 11th MAY.

As Punjab is the major province of Pakistan & voter register in Punjab is maximum as compared to others provinces, Total seats of Punjab Province are 371 (General 297, women 66 & non-muslim 8). Now

We see the past results of Punjab province:

PTI is a new grooming party as compared to PML-N, the basic advantage of  PTI is new young generation & a leader (Imran Khan) and this party is giving tough time to PML-N & other parties. Imran Khan doing 4-6 jalsa’s daily with a lot off gathering as compared to other parties. Publicity of PTI ( Imran Khan) is increasing day by day and the basic moytive of PTI is “Vote for Change (Naya Pakistan)’ . PML-N is also also doing great Jalsa’s and Saying “HAM NE BADLA HY PUNJAB, HAM BADLAIN GAY PAKISTAN (We have changed the Punjab , we will change the Pakistan)”. Now as for as 2013 election result is concerned, PML-N & PTI will take maximum seats as compared to other parties. But from seeing past result (2008) and governance of PML-N In Punjab with the leadership of Shahbaz shareef, PML-N is favorite to takes maximum number of seats in Punjab for Punjab Assembly because of their latest Laptop Scheme, Solar Light Scheme & professional training program in Punjab.

According to our point of view for PTI, if the new young generation (new registered votes) will take out their self in polling station for vote, then there will be change in Punjab assembly PP elections 2013 results. PTI will do great fight with PML-N. But we can’t neglect PPPP, because of their criticizing against PML-N in TV channels for bad governance against flood or etc and the merciful songs & videos of BHUTTO family, there is a possibility that PPPP takes a reasonable number of seats in Punjab assembly PP result in election 2013. But the final will be on 11th may 2013 evening. And our hope for best for every party and which party leads the election do something for Punjab.