Pakistan National Assembly is the major assembly of Pakistan after senate. Due to this everyone wanted to find Pakistan national assembly election results 2013. This national assembly NA members vote for Prime Minister of Pakistan. Now moving towards the election 2013, present scenario of all parties is that all party doing election campaigns in whole Pakistan include Punjab province, all parties doing great jalsa’s daily for voting . But the other provinces, scenario is different latest press conference of PPPP, MQM & ANP in Karachi, which said that, there is a lot of threats are given by Taliban against their election campaign & also target killing in Karachi. In this target killing MNA candidates is also targeted by someone due to security reason other than Punjab province. There is a lot of questions which are “some says, Election will not held on 11th may 2013 due to security reason”. But according to care taker Prime Minister& Army Chief Statements about election, now it is confirmed that election will be held on 11th may Insha ALLAH. And late night of 11 May National assembly results will start of election 2013. 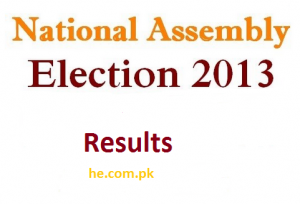 Total number of seats in national assembly is 342 & detail with province wise is that:

From Punjab Province, there are 148 seats, From Sindh province, 61 seats, NWFP having 35 seats, Baluchistan Province having 14 seats, FATA having 12 seats, Federal Capital having 2 sets &n 10 seats are reserved for Non-Muslims.

From previous general elections in Pakistan, the results are:

Every party is struggling for this election to get national assembly seats; because at this time no one party can take 2-3 lead in election, there will be allowance in future for making government in Pakistan. & it also be scene that according to today scenario there will be little lead of winning party as compared to other, no doubt at this time, PML-N is favorite because PML-N having almost all candidates which ware the winner of last election (Some candidates are left out their parties & contribute in PML-N ). PTI is a very emerging & grooming party now a day as compared to other, no doubt PTI & PML-N boycott the general election of 2008, and later on PML-N contributed in election, & PTI is doing boycott, According to my point of view that boycott of PTI having great advantages for party in this election 2013.

Now PTI is the second number of Party according to popularity & their popularity is increasing day by day. Especially Youth generation is supporting Imran Khan all over the country & Yooth doing their own struggle & election campaign for PTI. This is very positive thinking of youth because we are seeing that, first time in history youth is supporting general election & participating in election campaign. PTI is the best opposition for PML-N in this election, because if we suppose that PTI is not taking the part in election 2013(which is impossible now) then PML-N will take 2-3 lead in election 2013 because of falling the graph down of  PPPP in election 2013. In 2008, PPPP having a maximum seats in election making government for 5 years with MQM & PML-Q alliance. PPPP had not done the work which they states before the election 2008, butt according to my point of view the following three mains reason PPPP may get a reason seats in election 2013

MQM is a leading party in Karachi & it can be scene that in Karachi MQM is top as compared to other parties. MMAP & ANP having also some winning candidates this time, these parties can also take 20 + seats in election.

After upper long discussion about Pakistan National Assembly NA election results 2013, according to my point of view the results may be as followed. PML-N will take the lead & there is a possibility that PTI will be second number party in election, PPPP can take 40-60 seats. PML-q take 20-30 seats , MQM take 25-40, ANP take 20-35 & Jamat-e-Islami can take the 20-30 seats. There will be no 2-3 lead in election 2013. But it was too much earlier before the official’s announcement of National Assembly NA results during election 2013. At the end, I will say that, vote is must for us, don’t waste your vote & hope for best.